Concepts from training with Totokuhyoshi – the Sword as Shield – Part 1 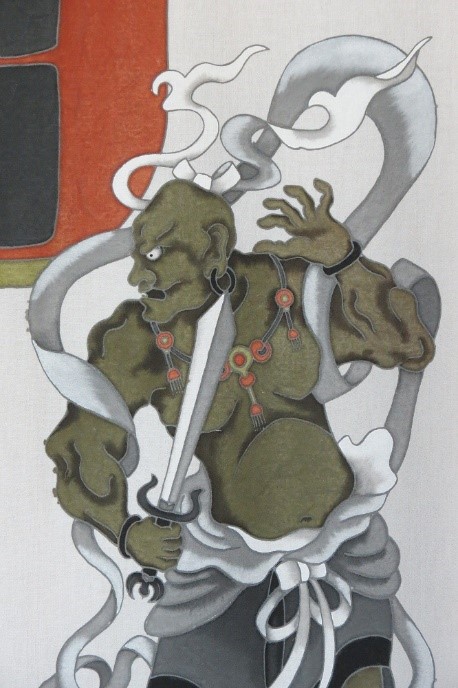 Recently, I had the opportunity to train with Shihan Rob Renner regarding the recent training in Japan and the concept of Totokuhyoshi. This kamae is general demonstrated with the sword held vertically out front as a method for deflecting shuriken; a practice which, while interesting to study, seems relatively impractical and, once tried, generally disappears into the shadows of our training. Like everything in our art, there is much more to this concept than simply deflecting shuriken – instead, this concept is actually found to be a basic concept of our art.

Totoku, as practiced in conjunction with the concept of Ken (the double-edged, Japanese broadsword which proceeded the tachi), appears to be, in part, the basis from which our Gogyo/Sanshin is derived. This much older sword involves more of a thrusting and hacking action in contrast to the cutting methods associated with the katana. In fact, many of the movements with the ken more closely resemble European training with a bastard sword than the training typically associated with the curved blades we generally associate with Japan. 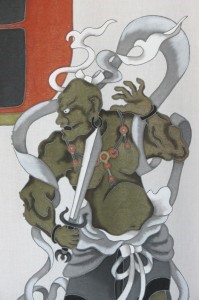 The basis of totoku is simple – the sword is placed as a barrier between oneself and one’s opponent in such a way that the opponent must go around it to attack. A simple concept which is difficult to master, especially in the instance when one is not carrying a sword. One way to begin studying this concept is to look at the relationship of totoku to many of our other kamae, especially kamae such as ichimonji, shoshin and seigan. In these kamae, the leading arm acts as the barrier around which the opponent must attack. By adjusting the angle and location of this barrier, one can direct where and how the opponent attacks. The structure of this barrier is also important: held too loosely, the arm does not provide a proper barrier; yet, held too firmly, it cannot adjust to modifications in the attack.

Rob demonstrated multiple exercises to demonstrate this principal of totoku. For purposes of discussion, let us focus on two – one armed with the ken and one unarmed – both using the same basic movement. While armed with the ken and when attacked from a daijodan cut (diagonal cut from left shoulder to right hip), shift to the outside of the strike by dropping back with the left foot. Then, using an external rotation of the arm, create a barrier to a second cut by placing the ken on the dent just above the opponent’s right elbow and aimed toward just outside his left shoulder. This barrier effectively prevents a return cut to the upper body and provides enough time for you to pivot into the space between the hilt and the opponent’s right shoulder. With a slight push forward, the opponent is pushed along the back edge of the blade, effectively cutting their own throat. [Phil Shihan’s note: Practice this first from Tenchi-Hasso (blade in front), then from Hidari Seigan, Hidari Chudan, and from the one-handed down guard position in Hidari Gedan. The rotation of the sword arm stays pretty much the same for each kamae. The sword travels more or less depending on its starting position in relation to the opponent, but is always placed as a barrier to the opponent’s sword.]

The second involves mimicking these same actions when attacked with a punch. With this particular exercise, practice placing the right arm in the same position as the ken in the previous exercise and rotating into a counter punch with the left arm as the opponent begins to make a second attack. The timing here should not be a 1-2 punch; but rather a 1-1.1 timing.

An additional aspect of study is the use of the shoulder to act as a barrier between the opponent’s punch and the head. In this instance, the shoulder acts much like the vertical sword of traditional totokuyoshi. An exercise to practice this is to stand with your right side facing your opponent and have them strike to the head. As a right punch comes in, rotate your right arm to a point just outside the elbow of the attacking arm and softly deflect the arm past your shoulder and head. When the opponent punches with the left, rotate the arm to the outside of the opponent’s left elbow and again deflect the strike away from the head. Allow your arm to remain in a state of relaxed extension – in other words, don’t lock out but let the arm remain naturally straight. Practice multiple series of punches to perfect timing and flow. Done properly, this should require no muscle or tension. Once the feeling is obtained, begin to practice putting this in motion. Remember that the purpose is to deflect the attack and not block it.

As you begin to get a feeling for these movements, it is time to begin exploring the concept of using the ken with Gogyo/Sanshin. Before working with a partner, try a simple version of chi no kata using the ken. Begin from shizen with the ken on the right side, sword resting with its point on the ground. Drop back with the right foot without moving the tip of the sword. Flip the sword upward as you step forward with the right foot and thrust forward. Once you have a feel for this motion, add a partner. Remember that the ken is a thrusting and hacking weapon, not a fillet knife; that said, try chi no kata against both a thrust and a hack. Note that with the thrust, the left arm can come into play to deflect a thrust (again, this is similar to some European techniques for deflecting thrusts).

For Sui and Hi, try starting in shoshin with one of several starting positions for the ken: at the side with the point facing forward, at the side with the point resting on the ground, and resting on the shoulder. In all cases, practice using the body to deliver the ken to the target. Additionally, where possible, allow the ken to form a version of totoku prior to actually striking or thrusting.

As you begin to practice this concept, you will begin to see this concept of totoku underlying much of our previous training. A good example of this is the previous focus on juppo sessho, which was used to narrow the choices of our opponents. In totoku, we focus further on the ability to anticipate our opponent’s attacks by allowing easy, but fruitless, choices. Similarly, Soke often indicates that we should treat our training like fishing and allow our opponent to hook himself – by using the naturally placed barriers to direct and deflect our opponent’s attack, we are able to wait until an opening naturally appears to end the conflict.