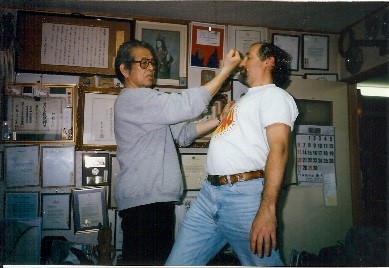 Not much is known about this Bujinkan Ryu. Soke Hatsumi has not taught much, if any of it in public that I am aware of. What I know of this Ryu is limited to a couple of conversations with Soke and one demonstration of a technique that I will discuss below.

“Gikan Ryu was founded in the 16th century by Uryu Gikanbo, who was the Daimyo of Kawachi no Kuni (Kawachi province). He lived in the family castle called Uryujo. It is said that Uryu Gikanbo’s punch was so powerful that he once broke a sword blade in half. He was also a master of Hichojutsu, and Senban Nage.

Gikan ryu contains many special kicks, punches, and throws and its dynamic footwork is used widely within the Bujinkan system. Unfortunately little of the actual techniques have been taught in the west and so little is known. People think that many of the Gikan ryu kamae are off balance because they need extensive practice before they start to “feel” right.

One of the special teachings of the ryu is Bufu ni sente nashi (from this side there is not the first strike), which tells us that this was a defensive, not offensive art.

The Makimono scrolls of Gikan Ryu have sections on the kata names, history, secret striking points (kyusho), and strategies used by the ryu, but research revealed that the makimono, when referring to techniques, only mention the names, and do not contain the step by step instructions as do some makimono. This was done in order to keep the teachings of the school secret in case the scrolls were stolen. From what we understand there are no densho in the Gikan Ryu. The whole range of kata for the ryu was taught orally.”

A book listed at the bottom of the article has additional information on this little known Ryu. See the footnote below.[ii]

Now, as for the technique I learned from Soke. I was visiting Soke in his office one afternoon in the spring of 1997 when he said, Phiyo, let me show you a Gikan Ryu technique. He jumped up between the sofa and table and said put your right arm out like a punch. We were in his office so I didn’t think I should really try to punch him, so I just stepped forward and held my arm out. Then he leaned back and put his hands up in a questioning pose, like he was asking “Why?”. In the photos below you can see the progression of the technique. His left hand and forearm slips over the top of my punching arm and deflects it to the outside (my right). This opens up my torso/face to a strike. Soke presents his fist toward my face and all I can see is his punch coming in. He then sinks his elbow down into my solar plexus area. This was a total surprise because my attention was still on his fist. My body reacts to his elbow strike by bending forward at the waist (not captured on camera) and he immediately follows with a back fist to my face. This causes me to lean backward, he then steps in with his left leg to deliver a right elbow to my shoulder socket area and drive me downward. 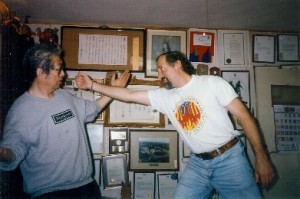 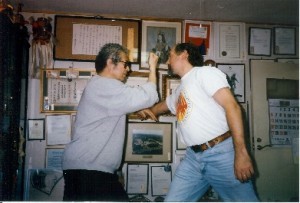 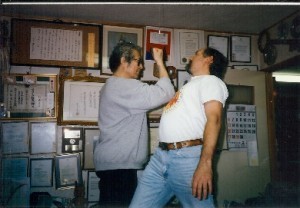 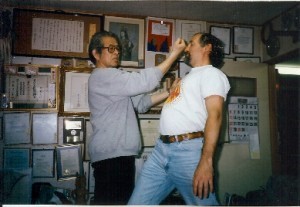 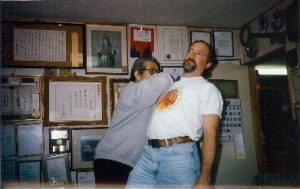 What may not be apparent in the photos is what he is doing with his left hand. After moving my punch outside, he slides his hand up near the inside of my elbow and continues to pressure my arm in the outside direction (moving me more to the right). Soke’s movement was very fluid. I barely noticed how he closed the distance, moved over the top of my punching arm and positioned his right arm to strike. All I saw was that incoming fist. It captured all of my attention. I didn’t even feel my body opening and moving to the right until my balance was broken. By then it was too late, he had hit me three times and was driving me down to the floor with pressure to my right shoulder (back and down) and his right elbow moving toward my face and then into shoulder.

Soke did not know or remember the name of the technique. He said why not call it the “Why” technique and laughed. It was two minutes of training that I was lucky enough to receive. I was also fortunate to have a friend on hand to document the technique. 18 years later I am reviewing my notes and saw these pictures stashed away and thought I would share it with you all here. I will show this technique at our upcoming black belt seminar and have it filmed for our member website so you can see what it looks like in movement. Check out our MEMBER WEBSITE for the very best video training in Bujinkan Budo Taijutsu and my own Shinken Taijutsu program. Our featured instructors include: Soke Hatsumi, Nagato Sensei, Noguchi Sensei, myself and a number of the top Gaijin Shihan in the Bujinkan. Check us out.

As always I appreciate you comments and feedback.

[ii] An Introductory History to the Schools of the Bujinkan, by Paul Richardson and Richard Van Donk. www.ninjutsu.com.