The Kihon of the Bo 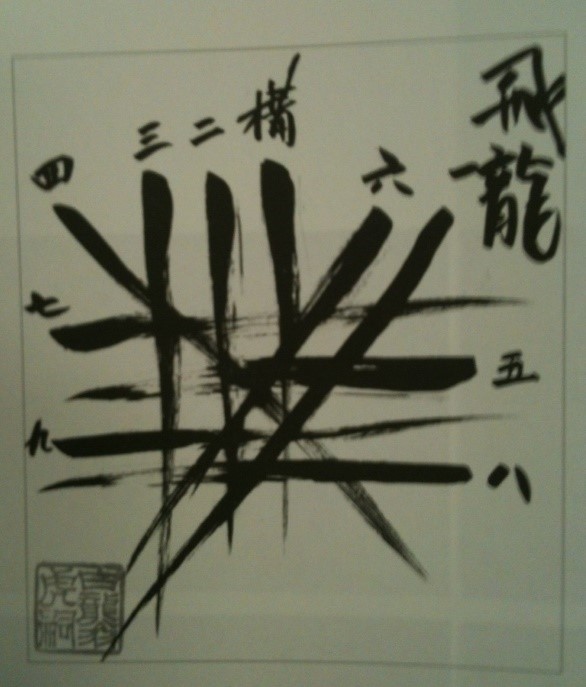 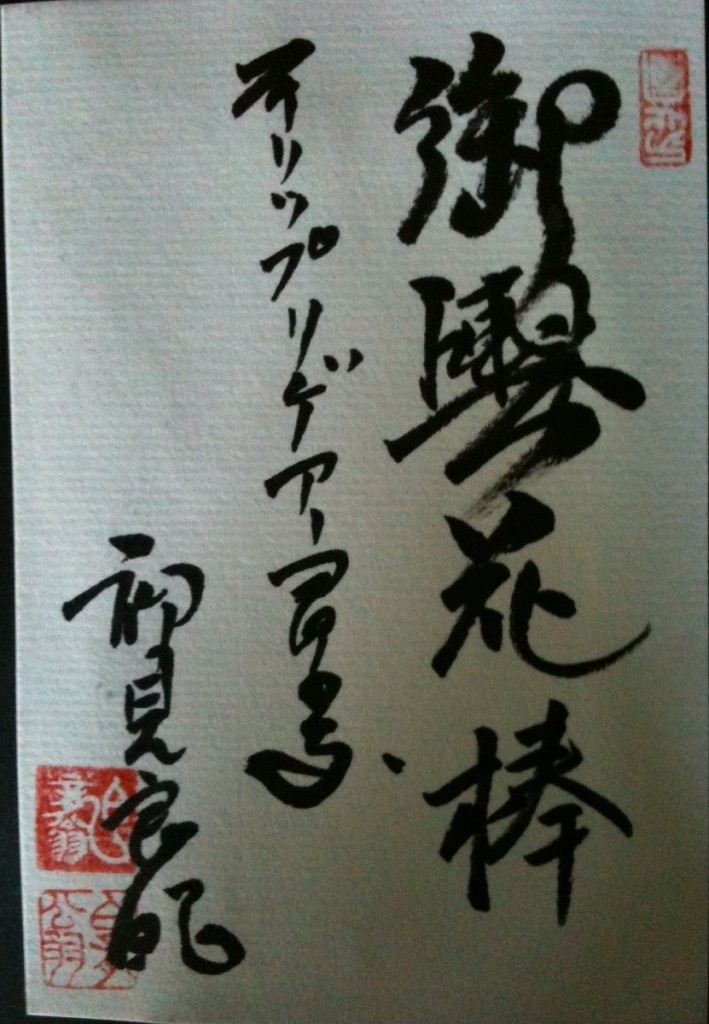 Soke told me long ago that in order to become good in a particular weapon you have to understand the “Taijutsu” of that weapon. Each weapon has its on Taijutsu that we must understand and conform to if we are to master the weapon. In the beginning, most of us try to conform the weapon to our own limited abilities. We pick up the weapon, imitate a kamae and “do techniques,” usually badly. If we do this long enough without good correction we develop very bad habits/form that can be much more difficult to overcome the more senior we get in the Bujinkan. I saw examples of this over and over again during my years of living in Japan. Gaijin Shihan from around the world would be visiting Hombu for training. Soke would show something at a very high level using a weapon. We would all practice it for a few minutes and then Soke would say, “okay Phiyo, 10 men please.” I would call out 10 of the visiting gaijin Shihan to demonstrate one of the techniques that Soke had shown us that day. Some would be fine and have the usual confusion that comes with trying to replicate what Soke had just shown. However, a large number of them would be at a total loss of what to do. When trying to demonstrate the technique, they would look awkward holding the weapon, show something that had no characteristics of what Soke was showing or they would completely revert to a technique of their own creation. (Forget weapons, that happened a number of times when Soke asked gaijin Shihan to demonstrate the Kihon Happo!!) It became obvious to those of us living in Japan that these gaijin had a very little base of knowledge of the weapon to draw from, that negatively affected their ability to demonstrate an advanced technique. They had little understanding of the Taijutsu of the weapon. In order to master a weapon you must conform yourself to the weapon, not the other way around. To do this you must develop a foundational base of knowledge by practice the Kihon Happo of that weapon for many, many years.

To quote Mark Lithgow, “Kihon Happo is the base of all of our training, not necessarily the basic.” In other words, Kihon Happo not something we only practice as a white or green belt and then put it away when we advance in rank. Rather the Kihon Happo is our base or structure from which all of our future movement comes from. We must spend many, many years developing a broad base set of skills/knowledge before we can ever approaching moving like Soke or one of the Japanese Shihan. I would suggest we must do the Kihon Happo for as long as we do martial arts, no matter what rank we may get to.

The Bo is a prevalent weapon in most of the ryu that make up the Bujinkan, so first I picked the Bo, Jo and Hanbo of both the Kukishinden Ryu and Shinden Fudo Ryu to study. I then did a quick search of all of the reference videos, books and notes that I have in my library for this ryu and then sorted these again for specific references to Bo, Jo and Hanbo. I settled on several of Soke’s DKMYS videos from the mid-late 90s that focused on Kukishinden Ryu Bo and Jo. I also went to our TakaSeigi websiteand pulled out Noguchi Sensei’s videos demonstrating Kukishinden Ryu Ryu Shoden level Bo vs Sword waza. I got out Soke’s Advanced Stick Fighting book and his Stick Fighting book (with Quentin Chambers) and some of my personal training notes that i took in Japan in the mid-late 90s, plus our BTSD Gedan instructor manual.

I decided on the 9 kamae that are illustrated in Soke’s Advanced Stick Fighting Book and then added in a couple more kamae from other resources. These are:

1. Jodan no kamae- Bo overhead and in front of the body creating a diagonal line pointing forward. Bo should be between your eyes or slightly off-set to the left or right side of your eyes.
2. Chudan- Bo under armpit, held horizontal to the ground with tip pointed forward.
3. Ichimonji- Held at waist level, bo pointed forward.
4. Seigan- Held at waist level, bo pointed up toward opponent’s eyes.
5. Gedan- Bo held low and to the side/behind the body. A Gyokko Ryu henka is to hold bo forward (like Ichimonji), but pointing low.
6. Hira Ichimonji- Bo held across thighs, arms extended down. Facing forward (bo is pointed to sides) or turning to put either foot forward and bo is pointed forward. A Gyokko Ryu henka (called Oto Nashi) is to hold the bo in Hira like position behind the back.
7. Munen Muso- A Gyokko Ryu kamae. The bo is held vertical in either hand. One end of the bo is touching the ground.
8. Tenchi- Bo is held vertical on left or right side. Bo is not touching the ground.
9. Heito- Hold bo as in Hira Ichimonji, then step back with either leg and twist arms around to side/back. Most of the bo should be held behind you.
10. Ihen- Transition posture. Bo is held sort of like in Jodan, but out to the side of the body and not quite as high. This kamae can change slightly depending on the situation.
11. Seiza- Kneeling with the bo on your right side laying on the ground pointed forward.

I practice getting into each of these kamae, usually starting with kneeling, then standing up and going from high to low stances and then vice versa. I do all of the kamae (that are appropriate) on the right and left side with either leg forward. I also change the grips many times to underhanded or overhanded or both. Next I spin the bo to reverse which end is pointed forward. I progress from this to do a few strikes with the bo as I transition between each kamae. You can take this a lot further by combining the 9 directional strikes with each stance. In other words, starting with Jodan no kamae, do each of the 9 strikes in a row or do one of the 9, get back into Jodan and do the next one, back into Jodan for the 3rd, and so on. Practice all of the kamae and all of the strikes, with either foot forward and in multiple hand positions, and either end of the bo. This gives you a very, very large number of repetitions to practice as you are building your base. I also like to combine striking with stance work because you are developing a physical skill to be able to strike from any position. You learn the strengths and limitations of each stance relative to being able to strike out from them. Some stances give you only a limited number of ways or directions that you can strike from and this is very important information to know to fully understand the Taijutsu of the Bo.

Next I practice Bo Furi. Spinning the Bo. I have an analogy for how to position your hands when spinning the bo that seems to work pretty well for new people learning the spin. Its called motorcycle, motorcycle, baseball, golf. Start spinning the bo while standing in place. Then walk around the room while spinning. Then stop in mid spin to do strikes and then continue spinning. Back up to a wall and spin, knee and spin, walk up stairs and spin, leap while spinning, walk on a balance been while spinning, etc. etc. Try all kinds of ways to restrict the space you have to spin the bo in and also strike. 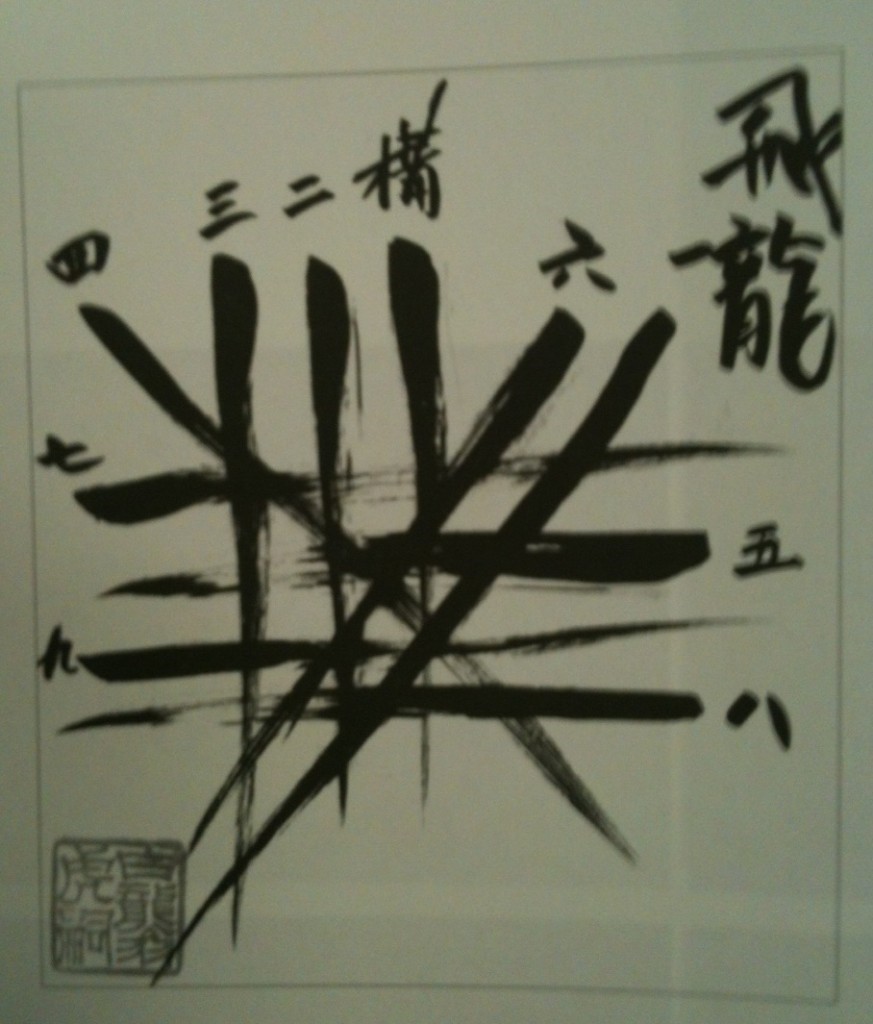 This calligraphy can be found on page 162 of Soke’s Advanced Stick Fighting book. I believe it is a linear depiction of the Bo being held in the 9 kamae referenced in the book, plus the 10th line depicting Bo Furi (spinning). The title of this calligraphy is Hi Ryu or Flying Dragon.

Find a solid object such as a heavy duty heavy bag or a padded support beam or padded tree. Practice 9 directional striking with strength, using good balance and deep stances. Then practice leaping and striking, focusing on the form and precision of the strikes. Then paint a small circle on your target or tape a quarter to the bag and practice Tsuki strikes to put the tip of the bo on the quarter. Do this while standing, then moving toward the target, then leaping, then see how close you can come with your eyes closed.

Once you’ve built up a strong base knowledge of the bo and developed strong skill sets in moving and striking you are then able to practice actual bo techniques and make some sense of them.

This is the Kihon Happo that I have used for many years to develop my base of knowledge of the Bo. Studying the bo in this fashion and you too will understand the Taijutsu of the Bo that Soke talks about. We will be putting up new training video of the Kihon Happo of the Bo soon on TakaSeigi.com.

Leave your thoughts and comments below, I’d love to hear from everyone