The Way It Was Part IV

The Mutsu Bay dojo and my farewell test —

So we trained in parks, on the beach and at the mountain dojo for about two years while Sensei Fukuda built a new beach hotel and campgrounds called Kokumen Kenko Shukusha. We pleaded with him to also build a Hombu dojo on the campgrounds. He did finally and the dojo was almost finished about the time that I departed Japan. I had my only rank test in that new dojo, before it was finished and officially opened. 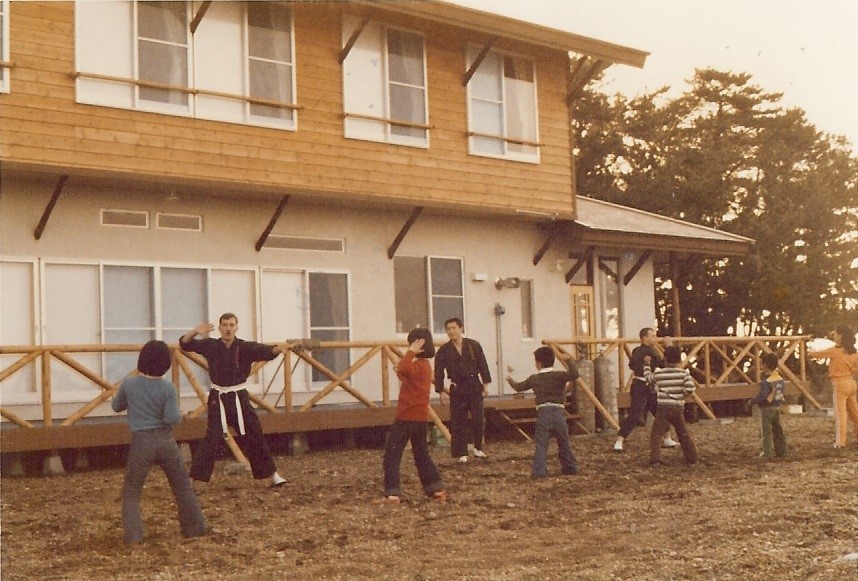 For about a year while the hotel was being built and then after, I would go up to Mutsu Bay and stay at the campsite. I would train on the beach and on the trees on the property. I helped to build the hotel, then worked in the coffee shop and even cleaned the hotel rooms once it opened. I learned how to say Kokumen Kenko Shukusha desu, Irrashimase !! when people visited the coffee shop or hotel. The hotel manager was one of Sensei Fukuda’s senior black belt students. We would train on the beach occasionally when he had the free time. My personal mentor or sempai was Mr. Takada. He had a dump truck business near the hotel and would frequently show up to teach on the beach or train with me in the trees. He specifically worked with me on my sparring techniques as I was competing quite a bit in tournaments in the northern prefectures. I represented Chugoku KuKempo so naturally they wanted me to be my best. I did pretty well overall. Especially since I fought as a white belt against black belts at every outing. Because Sensei Fukuda did not promote you to black belt until your belt actually turns black from the blood and mud and sweat, it could be quite intimidating to our opponent to face one of our crusty white belts in competition. I fought for close to two years, give or take. I believe I won more than I lost. I never got famous or anything, but my reverse spinning heel kick was feared by many an opponent for a few years. Because I was tall for a Japanese of the time, I had several inches reach on most of my opponents.

Training in the cold water of Mutsu Bay was a new kind of conditioning that we learned at the beach hotel. Somewhat pleasant in summer (at least for about 10 minutes until you went numb), it was down right cold in winter. We would train in the water for maybe 30 minutes and then run along the road and trails around the campgrounds until we were dry. The best part about the beach training was the inevitable eating the local scallops over a charcoal fire and drinking sake.

Finally the day came when my PCS assignment to Alaska was near. I visited Sensei Fukuda at the Kokumen KenKo Shukusha for the last time before my departure. I was a bit sad that the dojo had not been finished or opened yet, but I was in for a surprise. Sensei told me to join him in the new dojo structure. The floors, walls and roof were done, but the electric and finish hadn’t been completed yet. Still he bade me to kneel and make him tea. I did and then he poured tea for me. We talked for about a half an hour and then he said he was going to test me for my promotion. He asked if I was ready. I probably stammered a bit, but said yes. He then told me to put on my gi in the corner and he did the same. We then knelt down in front of each other with your gi on but our oni out in front of us. Sensei explained, now we would tie our belts and the first one to finish got to hit the other. Then with a wolfish grin he said go !!

Well, you can imagine what happens next. Firyu gets pummeled all over the dojo while trying to finish tying his belt. We did this probably ten times before I got my belt on before him three times in a row. Even though I tied mine first those last few times, I could not bring myself to hit my Sensei first. Instead I would politely wait for him to finish and then he would pommel me senseless !! It was great training on many regards. How to think and move under pressure. How to take a blow or blows and continue the mission. How to move in such a way to give yourself time to continue the mission. How to stay focused on one discrete thing, while dealing with a lot of outside interference.

Eventually Sensei must have grown tired of hitting me and we were done. We cleaned up and he had lamps brought into the dojo and a wonderful Japanese meal with cold beer and warm sake. Some of the senior black belts came in for the meal and I was congratulated on surviving Sensei’s very old and traditional way of testing black belts. Sensei then told everyone that I was his first student to ever go from white belt to Sandan in one test. I was deeply honored by this, but couldn’t for the life of me figure out what I had done to deserve this high rank. He must have seen the look on my face and told me not to worry. I deserved it for the years I put into training on the mountain and on the beach. For all the demonstrations, for all the time on the makiwara, for all the competitions and on and on. Mostly it was for my Tamushi, my warrior spirit, he said. And the rest of the black belts seemed to agree. So there I was, the not quite Japanese gaijin. I was content with where I was at in that particular moment. I was given the best room in the hotel for my last night there. The next morning I got up early, despite a bit of a hang over, and went out into Mutsu Bay for my own final training.